The first State school to be established in Rotorua was the Rotorua Public School, now known as Rotorua Primary School, in 1886. It would not be for another twenty-eight years that secondary education was introduced in Rotorua. This finally occurred after a long process on 8 June, 1914, when a Secondary Department was added onto the Rotorua Public School and it officially became the Year 1 to 12 (Year 13 was not introduced until the 1960s) Rotorua District High School. The Secondary Department was based in one room at the historic Victoria Institute, which was built in 1898 to commemorate Queen Victoria’s Diamond Jubilee of the year before. It was located two blocks further down from the main school on Arawa Street and stood where the Rotorua Courthouse is now. It was there that the twenty-one Foundation Pupils – eleven boys and ten girls – and their sole teacher began the School. Over a century later, there are now more than 950 boys and more than 100 staff.

The School steadily grew from its opening onwards, and its earliest traditions and institutions were established in its first years. It also quickly established itself firmly within the small town. Two notable events in Rotorua’s early history, at which the School’s military Cadet Battalion played significant roles, took place in 1924. The first was the burial, with full military honours, of the New Zealand Wars hero Captain Gilbert Mair, N.Z.C. (1841-1924), one of only twenty-three men to be decorated with one of the world’s rarest military decorations, the New Zealand Cross. The second was the dedication of the Cenotaph for World War I in the Government Gardens. This ceremony was particularly significant for the School as two of its men were lost in the Great War and are commemorated on the monument.

By the early 1920s, the roll had grown to more than 53 pupils. The Secondary Department moved from the Victoria Institute to its first separate accommodation on Pukeroa Hill next to King George V Hospital (now the Rotorua Public Hospital) in August, 1924. It remained there for the next three years. By the mid-1920s, more than 60 pupils were on the roll qualifying Rotorua for the establishment of a full high school. The first step towards this was taken when the Government appointed a new Board of Governors in November, 1926. Their job was to establish the new High School, arrange for the erection of the new school building on Pukuatua Street, and to manage the Rotorua College and Grammar School Endowments. These were five blocks of valuable commercial land in the Rotorua Central Business District, which had been established by the Government when the new Town of Rotorua was first surveyed in 1881, to fund local secondary and tertiary education purposes. The revenue from these blocks would later sustain the School during the Great Depression and World War II. 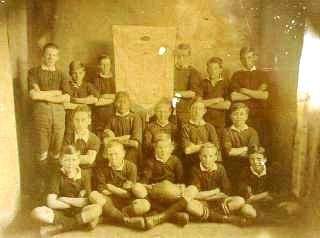 In February, 1927, the Rotorua High School (also known as Rotorua High and Grammar School) and the Rotorua Junior High School were opened with a roll of 209 pupils (92 secondary and 117 intermediate pupils). Rotorua was very proud of its new High School and soon after its opening the secondary pupils were assembled in front of the famous Government Bathhouse in the Government Gardens to have their photographs taken. The School continued to operate for 1927 on Pukeroa Hill but moved out of its first building there and into the disused rotunda-shaped ANZAC and Suvla Wards of King George V Hospital until the new school building on Pukuatua Street was completed. The Foundation Stone for it was laid by the Minister of Education, the Hon. R.A. Wright, at a Civic Ceremony on 12 April, 1927, and its construction was completed by August of that year. The magnificent Maori carvings and decorations for the building’s entrance hall were commissioned at Governor H. Tai Mitchell’s request from the newly established National Maori Carving School at Ohinemutu, now known as the New Zealand Maori Arts and Crafts Institute or “Te Puia”, as a tribute to the local Ngati Whakaue people for their gifting of the land for the Town of Rotorua in 1880. The School was officially re-opened at the new site by Minister Wright on 9 February, 1928. 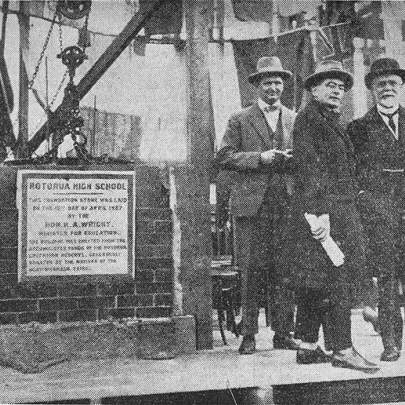 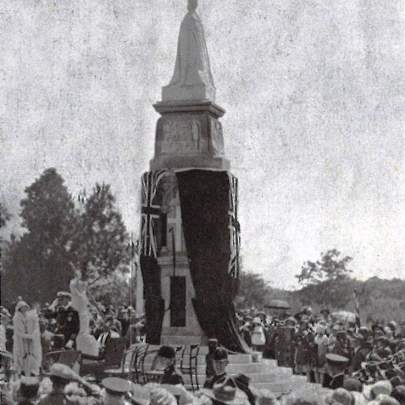 A few weeks later, the whole school again assembled in the Government Gardens where the Cadet Battalion formed the guard of honour for the Duke of York, later King George VI, for the dedication of the new Arawa Soldiers’ War Memorial.

The 1930s was a period of steady growth, consolidation and new development for the School. The two significant developments of this decade were the addition of a second-storey to the Main Building in 1938, and the opening of the Technical Department a year later in 1939. The second-storey provided the School with its first proper library and three additional classrooms, and opening of the Technical Department marked the start of tertiary education in Rotorua. Fitted out with the latest engineering and carpentry equipment imported from Great Britain, it was one of the most advanced technical training facilities in New Zealand. Night classes for adult students were offered there in engineering, carpentry, electrical wiring, book-keeping, accountancy, secretarial work, cooking, home management and a range of other vocational and hobby subjects. These courses eventually formed the basis for a full tertiary institution in Rotorua.

The opening of the Technical Department coincided with the start of World War II. Twenty-five years earlier the first Deputy Principal and the first Head Prefect were the School’s only casualties in that war. In World War II, over 500 Old Pupils – both men and women – served in the war, and sixty-three Old Boys and one staff member were lost (one Old Boy was later lost in the Vietnam War). The School was extremely proud of its serving Old Pupils and the many war decorations and medals that were won by its Old Boys. The official opening of the War Memorial Hall on 3 December, 1960, which contains the Roll of Honour panels and the portraits of its sixty-six fallen men, is the School’s memorial to its War Dead. 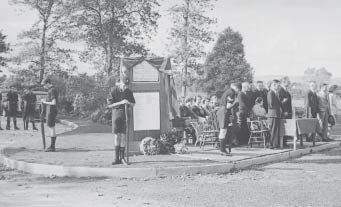 By the early 1950s, there were 1,250 pupils on the roll – the highest in its history – causing serious accommodation problems. Although many building additions had been made over the years since 1927 to alleviate this problem, the fact was that Rotorua had simply outgrown its original high school. To solve this problem the Government decided to gradually separate off various pupils to form new schools of their own. The first group to leave were the intermediate pupils at the end of 1956. They formed the new Rotorua Intermediate School in 1957. Then the girls left two years later to form Rotorua Girls’ High School in 1959. This left the boys and Rotorua Boys’ High School was opened that same year with a roll of 589 on the site of the former Rotorua High School.

The 1960s were time of considerable social change in New Zealand. This change was certainly reflected at the School. Its operational systems were overhauled and updated, and the traditional form structure was replaced with the innovative “Levels System” which was underpinned by vertical groupings made to the four Houses. The Levels System was a novel approach, but it was ahead of its time and did not survive beyond the 1970s. The House Groups, however, which was its major focus, remained in place and became the central feature of the School’s operation up to the present.

The major development of the 1970s was the role that the School played in the development of a full tertiary institution for Rotorua. The establishment of a Technical Institute Division at Rotorua Boys’ High School to run, expand, and administer all of its adult night classes marked the first major step in this process. Opened in February, 1972, its purpose was to gradually build up the number of adult students in Rotorua to qualify for a full government-funded tertiary institution to be established. In 1976, the next step was taken in the process when the Technical Institute Division was merged with Rotorua Girls’ High School’s Business College (all of the School’s secretarial and typing courses had been transferred there in 1961) to form a Senior Technical Division under the control of the Rotorua High Schools’ Board of Governors based at Mokoia Drive. On 1 April, 1978, this was formally re-established and opened as the Waiāriki Community College. Waiāriki Institute of Technology, as it was by then known, was merged with the Bay of Plenty Polytechnic at Tauranga on 1 May, 2016, to form Toi Ohomai Institute of Technology with over 14,000 students and more than 1,000 staff serving the entire Bay of Plenty and South Waikato regions, making it the third largest tertiary institution in New Zealand and the largest employer in the Bay of Plenty. On 1 April, 2020, Toi Ohomai along with all of the other polytechnics in the country, became a subsidiary of the New Zealand Institute of Skills and Technology.

The 1980s were a quieter decade for the School after the huge developments made in the previous two decades. Its profile was gently lifted and most of the buildings were modernized and refurbished. The major development of the decade occurred at its end when the “Tomorrow’s Schools” reforms were introduced in 1989. This marked the most significant change made in the education system in New Zealand since the historic Education Act of 1877. Its reforms completely transformed the way that schools and tertiary institutions were governed, operated and funded. Tomorrow’s Schools survived unchanged for the next thirty years until 2019.

The 1990s and early 2000s were a period of major new growth, renewal, re-discovery, and re-development for the School. The roll grew to a high point of just over 1,150 by the turn-of-the-century. Further refurbishment, and major new building developments took place on a level not seen since the 1950s. A much broader educational outlook was adopted, and the role of technology in the twenty-first century classroom was fully embraced. New innovations based on the traditional boys’ school model and a particular focus on lifting Māori achievement were made. By the early 2010s, the School was academically outperforming other boys’ schools in most Levels of the National Certificate of Educational Achievement – particularly for Māori boys.

In 1994, the School introduced boarding with the establishment of its first boarding hostel on Pukeroa Hill to which it had many historical connections. This added a very significant new dimension and character to the School. The Millennium Centre was built in 2000, and from 2005-2006 the structural mitigation and strengthening of the central part of the Main Building of 1927 saw it beautifully refurbished, modernized and protected from future earthquake damage. The School’s by then two separate and very successful boarding hostels were combined and re-established on the Pukuatua Street site in their own purpose-built buildings, the North and South Hostels of Tai Mitchell House, in 2005. 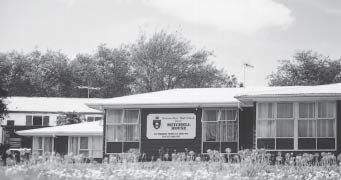 Rotorua Boys’ High School is today a strong and well-regarded boys’ school. It is extremely proud of its heritage and status as the oldest secondary school in Rotorua. It recognizes and celebrates the successes of its past and present pupils, and confidently looks to the future “To be the outstanding Boys’ High School in New Zealand.”